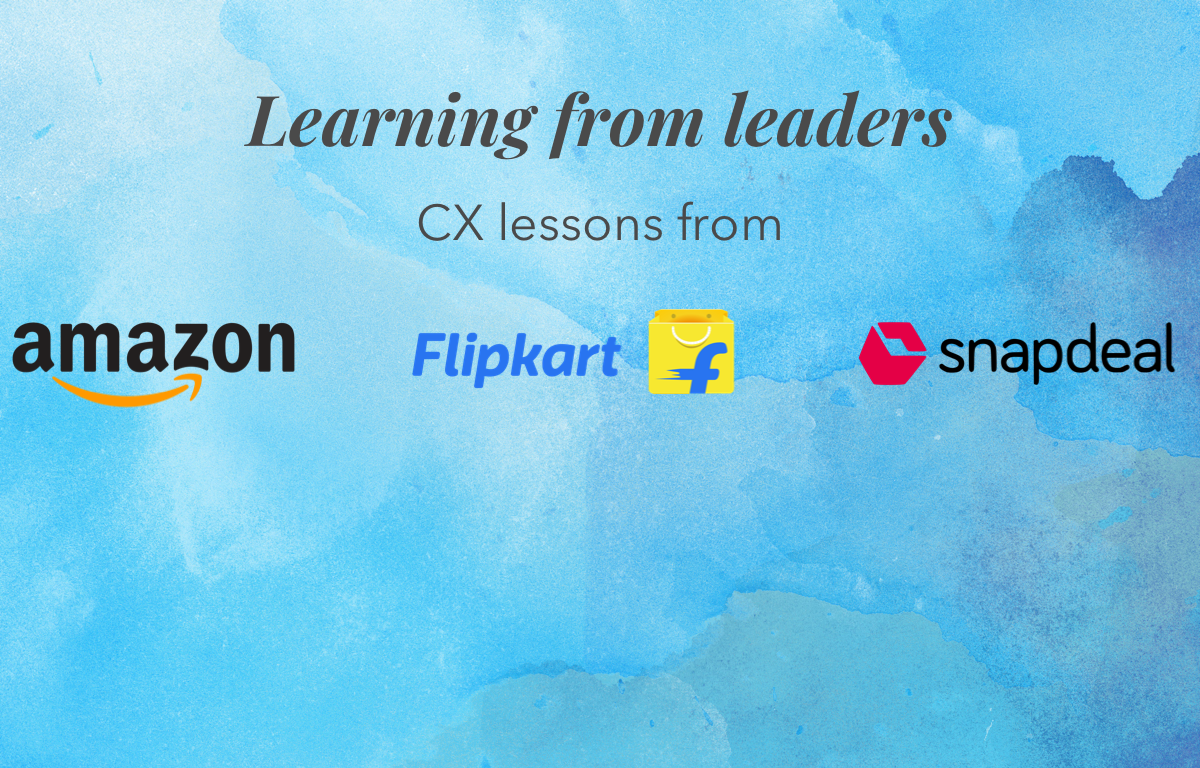 Learning from Leaders: CX lessons from Flipkart, Amazon, and Snapdeal

The unrelenting winner-takes-all war to capture the Indian e-Commerce throne!

If the Titans would decide to come out of the pages of Greek mythology and into the Indian online retail market, they would go by the names of Flipkart, Amazon, and Snapdeal. The three companies emerging as e-commerce giants backed by solid tech have revolutionized the retail marketplace in India. Needless to say, they have caused the brick and mortar store owners to revamp their entire business strategy.

As truly stated by Jack Ma, “In carrying out e-commerce, the most important thing is to keep doing what you are doing right now with passion, to keep it up.”

Let’s have a look at how did it all start, how are the leaders performing both on individual and competitive respect, and finally, what surprises does the industry store.

If we look at the performance of online retail in India, the sector grew from US$3.8 billion in 2009 to US$33 billion in 2017. With the present average internet penetration at 34% and expected to grow steadily, strong growth is expected in the e-commerce sector with almost 31% CAGR by 2021 and a market cap of US$64 Billion. The brain-child of Sachin and Binny Bansal, Flipkart, established in 2007, was the market leader with a 47% share in 2015, followed by Amazon at 24% and then Snapdeal. However, by 2017, the cards changed with Amazon India commanding the highest market share of 44.6%, followed by Flipkart at 33.6%.

While the battle to win the biggest share of one of the largest online consumer market in the world continues, there are some very interesting lessons to learn from the three companies. In this article, I will share some of the key aspects of the operations and strategies of Flipkart, Amazon, and Snapdeal in India. I will also try to highlight the difference it created for its customers or not.

Enter battle-zone: comparing the key facets of differentiation between Flipkart, Amazon, and Snapdeal

Regulatory restrictions to protect the mom and pop stores ensured that online retailers in India are not able to follow the inventory model, whereby retailers owned a part of the products. In India, the e-commerce portals acted as an intermediary between the buyers and sellers. When Flipkart started, it was not legally an Indian company since it was registered in Singapore. Further, a majority of its shareholders were not Indians. Therefore, it had to form a complex business structure to integrate its B2B operations with the marketplace model through a subsidiary company called WS Retail.

Shortly after, Amazon joined the fray in 2013. Like Flipkart’s WS Retail, Amazon Asia and Catamaran ventures jointly formed Cloudtail as the biggest seller on the Amazon India platform. Amazon focused not only on product variety and assortment, but also on seller conveniences such as onboarding help, verification tools to give insights, and fulfilment services. By the end of 2017, Amazon India offered over 160 million products across hundreds of categories. Snapdeal, on the other hand, was a pure marketplace player. In July 2016, it tied up with other players, such as Zomato, Redbus, Cleartrip, and Urbanclap, to cross-sell their offerings on its own platform to provide more varieties to customers.

As the marketplace strategy did not allow retailers to sell their own products, the bid rested on onboarding more sellers, who could provide more value-added services on the platform. But, the sellers upped their game as well and started signing up on multiple platforms to avoid dependence on a single retailer. This led to several problems regarding faulty orders and frauds, two major issues that haunted the marketplace model in India.

The smaller players get a platform to widen their reach. It is easy for a mom and pop shop to be present on all the available online stores and maximise returns. But, the eCommerce players need to maintain a tight grip on quality and customer experience. Use of strict seller selection criteria and customer driven validation of a seller’s experience has allowed Flipkart, Amazon, and Snapdeal to get over this challenge to some extent. Of course, as sellers get more educated about how the system works, it is likely that some sellers would try to game their reviews and rank higher despite a bad customer reputation. Therefore, it is extremely important for eCommerce companies to educate their sellers about the importance and value of CX and align them with the brand CX values.

Logistics, which is the key determinant for the success of any online model, was also a challenge in a market like India. Poor transportation infrastructure, a huge rural population, and addresses that were difficult to find were some of the early challenges. But, if one has to compete in such a landscape, customer experience is one factor that cannot be ignored. Each of these retailers came up with their own set of offerings to ensure that they were not left behind.

For example, Flipkart launched Ekart, its own logistics network, which played a major role in propelling the company to its premier position in terms of last mile connectivity. On its supply chain side, it initially started with on-demand orders from the suppliers based on website orders. However, due to increasing complaints and returns, Flipkart completely changed to the warehouse model. It started its own warehouses to provide logistical reach to the most remote corners of India. In addition, the company leveraged Ekart as a courier service to collect orders from third-parties as well.

Amazon always focused on its logistics capability and enabled seller conveniences through education and skilling programme such as Seller University, and Fulfilment By Amazon (FBA). This enabled sellers in India to benefit from a robust and scalable platform to sell their products online through Amazon’s expertise and distribution network. In 2016, the company had the largest storage space in India with its fulfilment centres (FCs) operational across 10 states. India has more than 14 million mom and pop stores and Amazon understood that partnering with them will enable it to reach practically everywhere. It did so by onboarding these owners with limited inventories in its seller network.

I believe logistics will see more technological innovation than anything else in the coming years. The challenge of infrastructure is definitely a big one, but, no matter how slow, that too is on its path of improvement in India. Therefore, logistics and delivery will become a CX differentiator for the player that thinks ahead of itself and adopts the most radical last-mile delivery approach.

Flipkart started in the CX improvement journey with delivery options, such as cash-on-delivery (CoD) and doorstep credit/debit card payments upon delivery. Since experiencing the physical products is an important part of shopping, the e-commerce retailer introduced a 30-day return guarantee, the first one to do so India. With the launch of Next Day Delivery in 2013, Flipkart Lite, and No Cost Equated Monthly Instalments (EMI) in 2016, Flipkart covered all the horizons of customer convenience, customized experience, internet connectivity, and easy way to pay.

Though the measures permitted consumers to be more open to online shopping, it was Amazon who ran away with the title of being ‘customer obsessed’. Great assortment of products, great value in terms of quality and pricing, and great convenience were the three pillars on which Amazon India operations created its empire. For easier use, Amazon launched its mobile app, which contributed over 85% of the traffic on Amazon. Over 100 million downloads were achieved by 2016. It considered its sellers as its customers as well. Also, innovations led by the e-commerce giant such as KiranaNow, Project Udaan, and Amazon Business received great feedback.

All the happenings encouraged Snapdeal to have customer centricity at the core and move away from Gross Merchandise Value. The promise of authentic products by selling through only certified sellers, measures such as next-day delivery across over 2,000 pin codes, and easy mobile exchange across over 30 cities were commendable actions by Snapdeal.

The one that is most customer-centric will win the deal here.

Shaping up a new competitive landscape, the new regulation in April 2016 whereby 100% FDI in e-commerce was permitted in India led to some dramatic changes. Since direct selling of its own products was not allowed, Flipkart created brands. These brands would be licensed to various sellers based on specifications directed by the company, while the ownership of the brand would rest with Flipkart. Following these events, in September 2017, Flipkart launched its in-house and made-for-Indian brand Billion and its large appliance brand MarQ.

Learning that private labels could be a major profit driving factor in the marketplace model, Cloudtail became Amazon’s bet to distribute their private labels. This turned out to be successful due to various factors like product uniqueness and identity, control over pricing and design and cost of production. Kindle app and prime video, a major competitor of Netflix, have been two very successful ventures.

Other major factors were the emergence of artificial intelligence and data analytics to boost logistics. Flipkart partnered with Microsoft to leverage AI, machine learning, and analytics capabilities in Azure such as Cortana Intelligence Suite and Power BI. This helped it to optimise its data for innovative merchandising and improving customer experience. On the other hand, Amazon focused on areas such as catalogue quality and product recommendation where machine learning was used with algorithms that leveraged past customer purchase and returns data (e.g., product size was too large/small) to infer the best size for customers. Snapdeal followed shortly with its data science centre at San Carlos, California in 2016 and acquired Silicon Valley-based startup Reduce Data, which helped brands understand consumer advertising across platforms.

With the foray of Mukesh Ambani into eCommerce, we are set to witness another promising entrant into the battleground. Along with that, India is due for its general elections this year, which means the market regulations might change drastically depending on the elections result. While this has little effect on CX, it does pose a level of uncertainty on how things unfold in the coming years.

Responding to the digital payment structure, while Amazon India made a bid to acquire Indian digital payments startup FreeCharge from Snapdeal, the latter chose to strip-off the load and focus on core business. The strategies had been different in each case but the goal is common. As evident from the above points, e-commerce business in India has always been about customer centricity. Amazon, Flipkart, and Snapdeal did not hesitate to revamp their logistics and supply chain, work across the regulations, or build huge tech teams to integrate AI in the face of consumer demand. The changes were dynamic but at the same time pretty seamless.

The article has been inspired by HBR article: Flipkart vs. Amazon vs. Snapdeal: Winner-take-all battle in India; Xie and Sethi; 21-May-2018.

Browse HERE, Buy THERE – How Can Retailers RETAIN Customers?